The multi-year agreement will see the Caesars Sportsbook logo on Capitals home and third jerseys worn for games played at Capital One Arena beginning with the 2022-23 NHL season. The 3 x 3.5 inch patch will be positioned on the upper right chest area of the jersey.

The announcement marks the Caps’ first agreement under the NHL’s Jersey Advertising Program, which allows sponsor patches on kits from the start of next season. It comes after the opening of the Caesars-owned William Hill sportsbook facility at Capital One Arena in May 2021, which was recently transitioned to the Caesars Sportsbook brand.

In addition to the home jersey patch, Caps owner Monumental Sports & Entertainment (MSE) and Caesars Sportsbook have expanded their partnership with additional casino, gaming and Caesars Rewards programming elements. The agreement also includes the entitlement of a Caesars hospitality space and VIP seating at Capital One Arena.

“Being woven into the Washington Capitals jersey is an exciting chapter in our collective story,” said Chris Holdren, co-president of Caesars Digital. 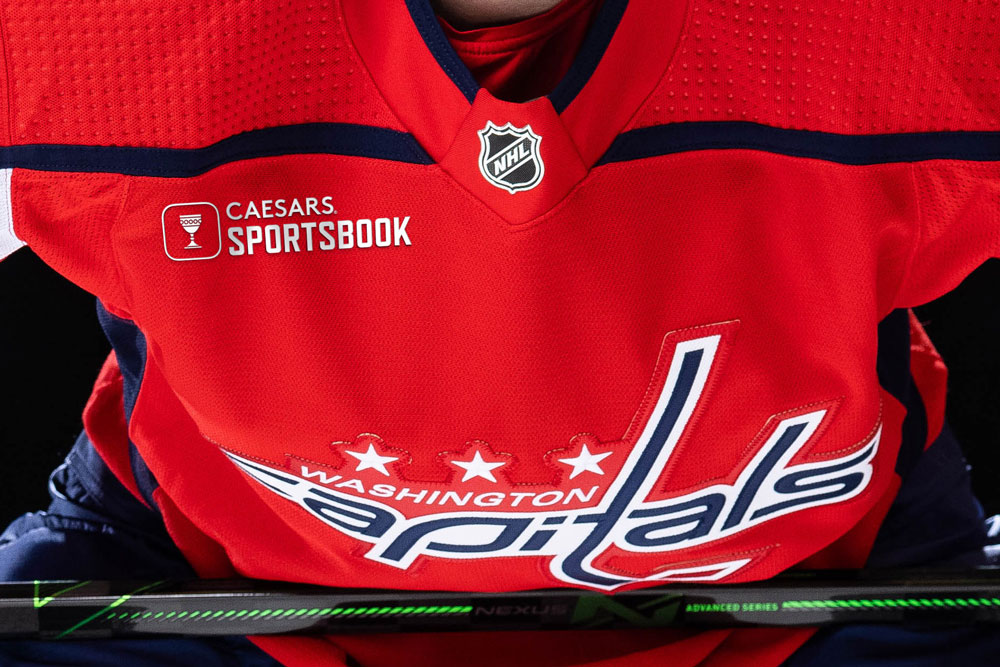 “Like Monumental Sports & Entertainment, we love blazing trails and we are always looking for innovative opportunities that drive engagement and storytelling for fans. We are proud to extend our historic partnership with such a storied franchise after launching the sportsbook at Capital One Arena.”

The NHL’s Jersey Advertising Program, which was agreed by owners earlier this year, allows up to two jersey sponsors per team when separate sponsors appear on home and away jerseys. The Capitals said it will announce an away jersey sponsor at a later date.

“Following the successful launch of Caesars Sportsbook adjacent to Capital One Arena last spring, we are thrilled to introduce Caesars Sportsbook as the Capitals’ inaugural home jersey advertising partner in a first-of-its-kind announced partnership in the NHL,” said Jim Van Stone, MSE president of business operations and chief commercial officer.

“MSE, the Capitals and Caesars share a commitment and passion toward innovation in the sports and entertainment space, and the opportunity to incorporate Caesars onto Capitals home jerseys is a wonderful development and exciting new fan engagement opportunity for both organizations in the nation’s capital.”

Sports wagering revenue in Washington DC declined 10.0% month-on-month to $1.8m in July after the district reported a 34.4% fall in handle.

Revenue from Caesars Entertainment-owned William Hill, DC Lottery’s Gambet brand and BetMGM was down from $2.0m in June, while DC’s handle fell from $19.5m to $12.8m.