State of the Union: Stars/Flutter, Pennsylvania, Nevada and more

This week’s State of the Union, in partnership with Segev LLP, covers the Stars Group and Flutter Entertainment merger to create the largest company in the online gambling industry, Pennsylvania’s first annual gambling report since the launch of sports betting in the Keystone State and the latest results from Nevada, where sports betting figures again trailed behind New Jersey.

Flutter Entertainment, the parent company of Paddy Power Betfair, has agreed a deal to acquire all of the shares in The Stars Group (TSG) and merge with the operator to form a combined business with annual revenue of £3.8bn (€4.3bn/$4.7bn).

Under the agreement, which would create the largest online betting and gaming operator globally, Flutter would exchange 0.2253 new shares in exchange for each TSG share, with Flutter shareholders owning approximately 54.64% of shares in the combined business and TSG shareholders 45.36%.

Flutter and TSG said that the merger would deliver substantial value creation for shareholders from pre-tax cost synergies of £140m per year, as well as potential revenue cross-sell in international markets and lower finance costs.

State-wide gambling revenue in Pennsylvania amounted to $3.29bn in the 2018-19 financial year as the introduction of legal sports betting and higher income from slots gaming boosted the state .

A total of 12 casinos were active in Pennsylvania during the 12-month period, with some rolling out sports betting services upon the launch of the state’s legal wagering market in November 2018.

Slots were the main source of income for casinos in the state by some margin, with gambling revenue for the machines amounting to $2.38bn, a 1.3% increase on $2.35bn in the previous financial year according to official figures released by the Pennsylvania Gaming Control Board (PGCB).

Nevada’s sportsbook handle for the month of August remained behind New Jersey for August, despite a 22.1% increase to $287.8m, while overall casino revenue slipped back below $1bn at $952.4m.

Mobile sports betting could be coming to Oregon next week, with the state lottery aiming to launch its Scoreboard-branded app the week commencing 7 October.

An Oregon Lottery spokesperson confirmed the provisional start date to iGB North America. However, they added, this is pending a final end-to-end test, and checks of its payment solutions.

The SBTech-powered app was originally scheduled to go live in time for Week 1 of the 2019 NFL season. However the lottery said that it would not rush through the roll-out, preferring to ensure the product was ready before going live. 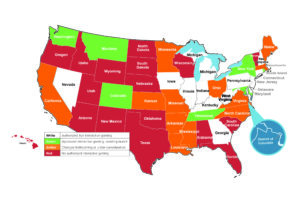 A Washington D.C. court has temporarily suspended Greek lottery operator Intralot’s contract to operate lottery services and sports betting in the district, indicating that there is “substantial likelihood” that a lawsuit alleging the deal violates federal law succeeds.

The ruling comes as part of mobile app developer Dylan Carragher’s lawsuit against the District, arguing the deal violates the Home Rule Act that established the powers of Washington D.C.

Carragher ⁠— who has created a sports betting app of his own ⁠— argues that the no-bid nature of the Intralot deal “ultimately violates DC citizens’ rights to receive fair and competitive prices for the contractual services provided to the government.” The lawsuit is taking place in the Superior Civil Court of the District of Columbia.

Rhode Island Governor Gina Raimondo has defended her decision to extend the state lottery’s contract with International Game Technology (IGT) without a tender process, arguing that the move would protect jobs in the state.

Raimondo faced questions about the state’s 20-year, $1 billion contract extension IGT as she testified in front of a special meeting of the state House Committee on Finance on House Bill 6266, the bill that extends the IGT lottery contract.

She argued the deal would ensure that jobs and revenue stayed in the state, after IGT said it could not guarantee it will maintain its 1,100 staff in Rhode Island if the contract was not extended.

Rush Street Interactive is set to launch the first mobile sports betting app in Indiana after being granted authorization from the Indiana Gaming Commission.

Rush Street will be able to launch its mobile product in the state from 3 October. The app will launch in partnership with French Lick Casino, where Rush Street has operated sports wagering activities since 6 September.

Although mobile sports betting in Indiana became legal on 1 September, the same date as retail, no operator has been able to launch a mobile platform until now. The commission stated that Rush Street’s app, however, meets all of the requirements of the state’s sports betting law.

The Rhode Island Lottery has reported a month-on-month increase in sports betting revenue in August after punters spent over $10m on legal wagering during the month.

The Twin River Casino in Lincoln remained the primary destination for sports betting in August, with the facility posting revenue of $607,836 for the month. This was down from $607,836 in July, but punters spent more at the casino, with total bets up from $6.6m to $7.4m.

US sports betting pushes revenue up at GAN in Q3

Online betting and gaming technology provider GAN has said that stronger-than-expected demand for its sports betting services in the US helped to drive gross operator revenue up 202.7% year-on-year during the third quarter.

For the three months to September 30, 2019, gross operator revenue amounted to $80.9m according to an initial trading update released by GAN. This is significantly up on $26.7m in Q3 of last year and $54.8m in Q2 of this year.