To SPAC or not to SPAC: An insider’s view

Having used special purpose acquisition companies (SPACs) as to exit investments, Clairvest’s Mohit Kansal, Michael Andrisani and Michael Wagman explain why they are experiencing a boom, and what may stunt growth going forward.

SPACs have been used for decades as alternative investment vehicles, but they have recently come into vogue and we have all read the “billions and billions” of dollars in the headlines. There is even an informative rap video by Cassius Cuvée on YouTube for those who prefer that medium.

Many companies are foregoing the traditional IPO route and instead choosing to “go public” via SPAC transactions. This has been particularly prevalent in gaming, with notable deals involving DraftKings, Rush Street Interactive and Golden Nugget Online Gaming, as some examples.

Amidst all the excitement, finding an honest and balanced view on the SPAC market is challenging. We hope we can provide some of that view while acknowledging a partial bias that, as private equity investors, we sometimes compete with SPACs for investment opportunities. Further, we have used SPACs as a partial exit mechanism twice in our portfolio over the last few years.

The short answer is SPACs can provide relatively quick access to public markets, which can be appealing to some, but it does not come without risk, uncertainty and cost. Always remember, there is no free lunch.

SPACs, or special purpose acquisition companies, are blank check publicly listed companies formed for the sole purpose of buying or merging with another company. A SPAC can replace the typical IPO, or initial public offering, as a private company can be taken public by merging with the publicly listed SPAC.

Once a SPAC executes the successful combination, the resulting company will become publicly traded with all the typical pros and cons of being a listed entity. A typical SPAC has the following characteristics:

Some of the pros and cons of a SPAC-IPO are set out below. 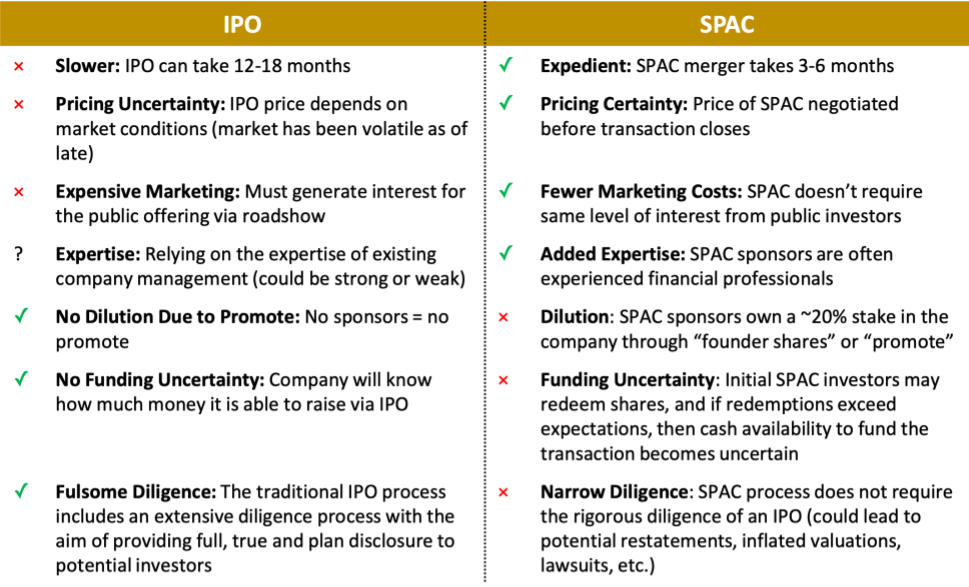 So why the excitement and the headlines?

The increase in SPACs as an alternative to the traditional IPO is the result of many factors, but one of the most important is pricing certainty given the volatility we saw in the public markets in 2020.

To put the excitement in perspective, in the first four months of 2021 there were 306 new SPACs versus 248 in 2020 versus an average of less than 30 for the seven years prior. This is undoubtedly a boom.

Given the excitement we have seen in public markets and run ups in stock prices for the likes of DraftKings, FanDuel (via its parent Flutter), Penn National, Golden Nugget, Rush Street Interactive and more – it is no surprise that gaming is a target for many of these SPACs. It is worth noting, however, that this growth, high fees, and sometimes narrow diligence is drawing the attention of the United States Securities Exchange Commission (SEC) as of late.

One of the key downsides of a SPAC (beyond the dilution) is the uncertainty of how much cash will be present at close as SPAC investors get to decide at the last minute if they are “in” or “out”. Many SPACs, therefore, try to raise a PIPE (Private Equity in Public Equity) which brings investors in ahead of such a decision to provide a floor of cash to come in a deal (e.g., to fund growth or provide cash-out to private investors).

These PIPE investors are also typically premier public market investors, so beyond providing some certainty to cash, their presence in a deal provides a strong vote of confidence to the market. For example, with the DraftKings SPAC combination, $380M was raised from A+ investors ahead of the combination.

Whenever a deal gets announced, the size of the PIPE (and who is involved) and if the stock is above or below the $10.00 benchmark are strong signals to their future success.

That said, PIPE investors have started moving to the sidelines; SPACs are now struggling to find PIPEs to complete their planned acquisitions. Institutional investors that have ploughed billions of dollars into PIPE deals since the SPAC boom emerged last year have become overwhelmed by the volume of transactions and weary of rising valuations.

Without an entity backstopping some cash at the outset there is not going to be a vibrant SPAC market. Unless we see these PIPE investors come back, one could expect a detrimental impact on the viability of the SPAC market, and we are starting to see a pull back in the number of new SPACs being launched as a result. Of course, some SPACs might be fine without PIPE capital, but they run the risk of being public with no real float and limited access to capital to fund growth.

Individual SPACs generally have a target industry or strategy based on the founder’s experience, and we have seen many “gaming-focused” SPACs. Below are some notable examples:

We could go on – there’s Betway, Genius Sports, Sportradar, and Lottery.com. SPACs and gaming seem to be a good fit. As SPACs seek disruptive and high-growth companies, which has been particularly true for the gaming sector as of late. Further, gaming, gambling, and sports betting seem to be underrepresented in the public markets, and as such, there are many private assets for SPACs to seek out.

Where do we go from here?

As of the late, the launch of new SPACs is slowing, however, the number of SPACs already in the market and looking for deals is plentiful (300+).

The prevalence of SPAC transactions going forward will largely depend on the sufficiency of PIPE capital, high public market valuations, and relative inaction by the SEC. If these aspects hold then we should expect more SPAC-Gaming announcements over the next year for companies that are “ready” to go public (a high bar in our opinion).  As we have described, there is no free lunch.

The ultimate success of these SPACs will not be known for years as after the deal announcement, comes the actual business combination, and then most importantly, the public company’s performance. We and hundreds of billions of dollars are watching the market closely.

Michael Wagman joined Clairvest in 1998, has almost 25 years of experience as a private equity investor. He participates in all areas of the investment process. Additionally, Michael has twenty years of experience in the gaming domain, having sourced and worked with many of Clairvest’s gaming platform investments covering regional casinos, route based gaming, online gaming, sports betting and technology providers. Previously, Michael worked at BMO Nesbitt Burns Equity Partners Inc., a private equity vehicle established jointly by the Bank of Montreal and Nesbitt Burns. He began his career at Nesbitt Burns in investment banking, focusing on both corporate finance and mergers and acquisitions. Michael earned his H.B.A. with distinction from the Richard Ivey School of Business and is a CFA Charterholder. He is a member of the Clairvest Board of Directors.

Mohit Kansal joined Clairvest in 2016 and participates in all areas of the investment process.  Before Clairvest, Mohit worked as an Engagement Manager with McKinsey & Company and prior to that was an investment professional with GRI Capital (a leading Canadian family office).  Mohit has earned an MBA from the Wharton School at the University of Pennsylvania and a Bachelor of Applied Science from the University of Toronto.

Michael Andrisani joined Clairvest in 2020 and participates in all areas of the investment process. Prior to joining Clairvest, Michael worked on a variety of M&A transactions in investment banking at Lazard (New York) and as an attorney at Cravath, Swaine & Moore (New York). Michael earned a JD from Osgoode Hall Law School and a MBA and Bachelor of Business Administration from the Schulich School of Business.