This week’s State of the Union, in partnership with Segev LLP, takes in developments in New York, North Carolina and Indiana, as well as the latest figures from New Jersey and Delaware.

Legal sports betting launches in New York
The Rivers Casino & Resort in Schenectady has become the first venue in New York to accept legal sports bets, six years to the month after land-based sports wagering was legalised in the state.

Casino representatives, local dignitaries and a number of sports stars were at the venue for the ribbon-cutting ceremony yesterday (July 16). Former NFL American football players Sean Landeta and Erik Coleman were among those in attendance.

The new Rivers Sportsbook occupies just over 5,000 square feet, with club chairs and table seating for 80 guests and five private booths with TV monitors – each of which can accommodate six people. The lounge also includes 18 individual VIP seats and 32 table-top seats.

Trio of casinos to begin PA igaming live test
Two of Pennsyvlania’s land-based casinos began final testing of their online gaming offerings on July 15, with a third following on July 17.

Hollywood Casino’s offering will begin taking wagers at 11AM, running until 7PM, with Parx live from 2PM to 10PM. This will be followed by a second, expanded test tomorrow (July 16), from 10AM to 8PM for Hollywood Casino, and 2PM to midnight for Parx.

North Carolina tribal betting bill heads to Governor
A bill to include sports betting in the list of Class III tribal gaming products is headed to the North Carolina Governor Roy Cooper after it was approved by the state’s House of Representatives.

Senate Bill 154, finally went to a full House vote yesterday (July 15), after a reading scheduled for July 11 was delayed. It was approved by 90 Representatives, with 27 voting against.

The bill, which was filed in February before stalling in a House committee after passing through the Senate in April, benefitted from the state’s legislative session being extended beyond July 1, to allow lawmakers to thrash out a budget deal.

The Temporary Certificate of Authority can be issued by the state regulator while their license applications are processed, allowing them to launch wagering while the Commission decides whether or not to issue a full license, per Indiana’s Sports Wagering Statutes.

The bill was introduced in January and went on to secure approval in the House and Senate, but was last month subject to a number of amendments as lawmakers sought to iron out issues before passing it on to the Governor.

With Sununu  having signed off on the bill, the state Lottery Commission will now launch a request for proposal to select online and retail sports betting vendors. It is hoped that partners could be in place by January 1, 2020, with a view to opening the market by July 1. 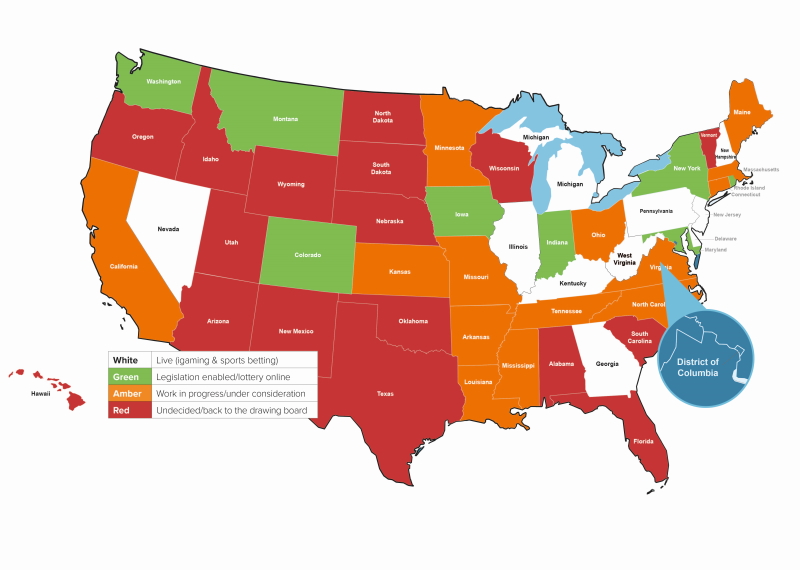 Slots remain the primary source of income for New Jersey’s land-based casinos by some margin, generating $168.3m in revenue compared to $165.2m in May.

Bill to establish NC gaming commission passes House
A bill to establish the North Carolina Gaming Commission, which would be tasked with conducting a feasibility study on a potential roll-out of sports betting has been approved by the state’s House of Representatives.

Senate Bill 574, which was passed by the North Carolina Senate in May, has now been passed by the House, following its third reading in the chamber.

It establishes the North Carolina Gaming Commission, which will be handed responsibility for regulating gambling in the state. It will operate under the Department of Commerce for budgetary purposes, but will be an independent, self-supporting and revenue-raising agency.

Delaware igaming revenue dips to year-low in June
Monthly revenue from Delaware’s regulated online gaming market slipped to a year-low of $257,263 (£206,610/€229,086) in June, while consumer spending was at its lowest since January.

The June figure will come as disappointing news to the US state, which in May posted revenue of $313,648, its highest monthly total for the year to date.

Player spending also slipped from $11.7m in May to $8.9m, which is the lowest monthly figure since January, when players wagered $7.4m on online gaming. Consumers won $8.7m in June compared to $11.4m in the previous month.

Washington to hold public hearing on sports betting regulation
The Washington State Gambling Commission is seeking public input on the future of sports gambling in Washington, including discussion of three bills that were introduced during the 2019 legislative session.

House Bill 1975 authorizes sports betting only within tribal casinos. Gambling information may be transmitted over the Internet under the proposed bill, but wagers may not be placed online.