This week’s State of the Union, in partnership with Segev LLP, covers the latest revenue figures from a number of regulated markets, as well as legislative progress in Kentucky and Michigan.

Revenue from regulated sports wagering in New Jersey amounted to $25.2m last month, up from $9.2m in August 2018 and also an improvement on $17.9m in July of this year.

Sports betting handle for the month stood at $293.6m, with $249.2m of this total generated through online sportsbooks. The remaining $44.4m came courtesy of land-based operations in the state.

Meadowlands Racetrack and Flutter Entertainment’s FanDuel remain some way out in front in the New Jersey market, posting revenue of $11.9m for August.

A total of $111.8m was spent on interactive gaming in August, with $62.0m going on interactive slots and $49.7m on table games, according to figures from the Pennsyvlania Gaming Control Board.

The total wagered with the three operational online casinos was more than double the $49.2m in July, when online gaming was only available for the final 16 days of the month. Operators collected gross revenue of $3.43m in August.

Iowa generates $2.2m in first fortnite of legal betting
Licensed operators generated $2.2m in revenue from the first sixteen days of legal wagering in Iowa, with the William Hill-powered offering at the Prairie Meadows Racetrack and Casino leading the market over the period.

Iowa’s regulated wagering market opened for business on 15 August, with the inaugural set of results setting out figures through to 31 August. Customers wagered $8.6m in total over the period, winning $6.4m, figures from the Iowa Racing and Gaming Commission reveal.

While mobile betting was permitted from day one, players are required to register in-person for an online account. This contributed to retail activity accounting for the bulk of handle ($4.9m) and revenue ($1.7m) in the period to 31 August. Customers wagered a further $3.7m via mobile, with operators holding $424,129 of this sum.

These reveal that the Sacramento region, comprising California and northern Nevada, was the largest regional contributor. It alone accounted for $9.28bn of total GGR (up 3.1% from 2017), from 73 facilities. This growth came despite one venue closing during the year.

The rise compared to July was largely fuelled by the start of the college football season and the approach of the NFL, as football bets surpassed $6m, up 792% month-on-month and 152% year-on-year and revenue totaled $1.8m. Handle was up 347% year-on-year compared to August 2018, the month that legal betting was introduced in Mississippi.

The majority of money wagered in the state – which only allows betting in casinos – again came from properties in the coastal region to the South of the state, where $13m was wagered and casinos took in $1.8m in revenue. At 65.4% the proportion of bets coming from the Coastal region drastically increased from July’s 54%, as the handle in the state increased 50.2% while revenue more than tripled.

Delaware Park, Dover Downs and Harrington Raceway took just $4.4m (€4.0m/£3.5m) in sports lottery wagers, down considerably on the $7.7m staked in August 2018, according to figures released by the Delaware Lottery.

Despite the year-on-year drop, the figure for the month ended 25 August was up by around $500,000 on July’s $3.9m – which was the poorest month in terms of handle since sports betting was introduced in June last year.

Fox Bet hails US launches as Super 6 audience grows
Fox Bet has hailed its early progress, which has seen real-money wagering launched in two key states, and the nationwide rollout of a free-to-play predictions game.

Fox Bet’s mobile offering first went live in New Jersey on 5 September, before launching in Pennsylvania days later. This was followed by the launch of Fox Sports Super 6 for players in all states, the second component of the 25-year partnership struck by The Stars Group and Fox Sports in May this year.

“The pace of progress and the dedication and execution of our team and the FOX Sports team is extraordinary. 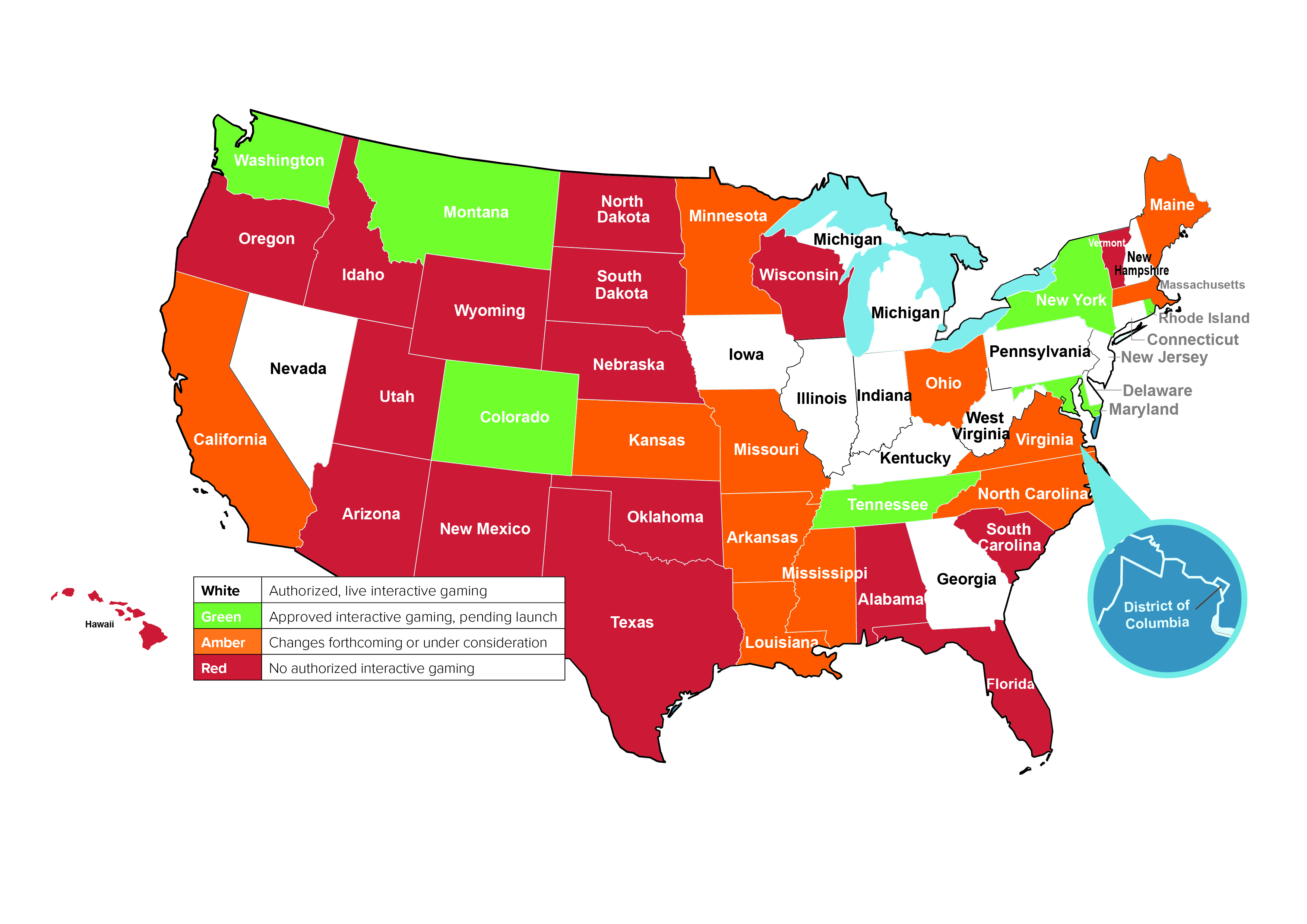 GAN, which already delivers JACK’s simulated online gaming service, will support real money gambling should enabling legislation and corresponding regulatory approvals come to pass in the jurisdictions where JACK operates. These include Ohio, Kentucky and Maryland.

GAN will deliver its Enterprise Platform, including the US-patented iBridge Framework linking the GameSTACK to JACK’s existing casino management system deployed in Ohio. The platform is anticipated to be operated from intra-state infrastructure entirely deployed in Ohio.

… with Kambi to supply sportsbook tech
Kambi Group is to provide its multi-channel sportsbook technology to properties owned by JACK Entertainment in the US.

Kambi will again team up with GAN to provide a full online service to JACK should online gaming and sports betting be legalised in Ohio. It will also provide on-property sportsbook services at JACK Cleveland Casino and JACK Thistledown Racino, a thoroughbred racing and gaming facility in North Randell, Ohio, should enabling legislation and corresponding regulatory approvals come to pass.

With Michigan-based JACK also operational in Kentucky and Maryland, the long-term contract also includes provisions to extend the partnership into further US jurisdictions should commercially attractive opportunities arise.

Michigan sports betting bill passes first committee stage
The Michigan House Regulatory Reform Committee has approved a bill that would allow for legal sports betting in the state, passing the bill to the House Committee on Ways and Means.

The committee progressed House Bill 4916, which was introduced by representative Brandt Iden on 5 September, on Tuesday 17 September. If passed into law, the bill would permit online and retail wagering, with land-based casino permitted to operate one mobile skin apiece. The Divison of Sports Betting would be created to serve as the regulator for the market.

The bill allows for both pre-game and in-play betting and does not specify a source of data that must be used for results.

NY regulator relaunches gaming market study tender
The New York Gaming Commission has reopened the tender process for an independent company to conduct a study into the expansion of the state’s gaming market.

The Commission originally launched a tender in June, setting a deadline of 31 July for companies to submit study proposals, with a view to having a report completed and published by the end of the year.

However, this appeared to fall behind schedule, with no announcement of any bids on the proposal deadline.

Rather than change the dates, the Commission has relaunched the tender, noting that having a report published quickly is no longer the sole focus.

Under Beshear’s proposed policy, tax revenue raised through gambling expansion would be fund the pension system for public servants. This would benefit the state’s teachers, police officers, firefighters and social workers.

The candidate added that the extra tax revenue brought in from legalized gambling could be used to fund local services such as health clinics, without the need for local tax increases.

Unibet began sportsbook operations in New Jersey last week and has now signed a multi-year sponsorship deal with the New Jersey Devils – its first with a professional sports team in the US.

The Kindred-owned operator will activate the sponsorship through in-arena and digital presence and will offer customers Devils experiences and hospitality.

PA fantasy sports revenue up 47% in August
Pennsylvania’s fantasy sports market has reported a 47.2% year-on-year increase in revenue for August, with DraftKings leading the market over the month.

DraftKings’ revenue grew by 50.6% from the prior year to $755,952, further extending its lead over FanDuel.

The Flutter Entertainment-owned brand also reported strong year-on-year revenue growth, however, with its $610,019 representing a 43.7% improvement on August 2018.